According to recent studies, more than twenty thousand Italian words have entered, throughout the centuries, the communal lexicon and are now used internationally, sometimes with meanings that differ significantly from their original terms of use.

The study of these Italianisms is indeed interesting as it provides with a depiction of the influence of Italian culture in the world, as well as the distribution of Italian communities in foreign countries.

As always happens in linguistics, vocabulary is not an unchanging entity, as words are subject to change according to use and context. So, if you ever wondered about the origin of these widely used Italian words, here’s what you need to know:

Ciao is the main informal greeting in Italian language, but it is also commonly used in many other languages with a slightly more specific meaning. The word itself actually comes from Venetian s-ciào and it was used in the fixed expression s-ciào vostro, meaning “I am your slave”. For its part, s-ciào came from the medieval Latin word SCLAVU(M), originally meaning “Slav” and, since Slavs were often forced into slavery in the Middle Ages, by extension, “slave”.

The name of the Italian dish everyone loves has an uncertain origin. Although is sure the derivation from dialectal pinza “clamp” (from Latin PINSERE, “to pound, stamp”), linguists suggest a connection with Greek πίτα (“cake, pie”, cfr. Hebrew  פיתה and Arabic كماج). In any case, none of these words have something to do with pineapple.

No, there’s nothing cool with the mafia culture and you should be careful when using this word: it may hurt someone’s feelings!

Literally meaning “to the tooth”, this adverb is commonly used to express the right consistency that pasta must have to be considered well cooked. The expression sounds pretty figurative, but its origin is unclear: some think that it was created as a comparison of the consistency of the pasta with the one of a tooth, others infer that, when it comes to verifying if pasta is well cooked, Italians use to break one piece of it between two teeth. One way or another, your pasta must certainly be al dente if you want it to be 100% Italian!

This expression, literally meaning “all fruits”, is Italian indeed, but it is used in Italy just in reference to the famous Little Richard’s song, as the correct Italian form would actually be tutti i frutti.

This term is confusing and its use might lead to puns and misunderstanding. Coming from Italian casa (“house”), with the diminutive suffix -ino, casino literally means “small villa” but, in modern Italian language, it means “brothel” and, by extension, “mess”. The use of this word to name gambling houses is due to the fact that, during the 19th century, the term casino came to include public buildings where pleasurable activities took place, which includes both brothels and, of course, gambling palaces.

Have you ever listened to Count Five’s “Carburetor Dung”?

Plural form of the Italian surname Paparazzo, this word was made famous by Federico Fellini’s La dolce vita (1959), where Mr. Paparazzo was a freelance photographer pursuing celebrities. The word paparazzi is now used as plurale tantum in English and in other languages.

Borrowed from Italian viva, where it functions as an interjection (e.g. “Viva l’Italia!“), it literally means “long live” and is used to acclaim or show support.

The name of the Italian dish everyone loves has an uncertain origin. Still, tastes very good!

The sadly renown name of the Sicilian mob is often used, in a broad sense, in reference to organised crime – in Italian language too, Cosa Nostra is the most common term in reference to Sicilian Mafia. This Italian word too has a very uncertain origin: the first use of the term mafioso (from Sicilian mafiusu “bully, arrogant but also fearless, enterprising, and proud”), is found in the play by Placido Rizzoto, I Mafiusi della Vicaria, first performed in 1863. Linguists are divided regarding the etymology of the Sicilian term: for some, it has an Arabic origin (مهياص, mahyas, “baldness” or مرفوض, marfud, “refused”), others point to a Northern Italian dialectal form maffia, used in the first legal documents in which Sicilian organised crime was mentioned.

Al dente: that’s how your want your pasta!

This expression, literally meaning “all fruits”, is Italian indeed, but it is used in Italy just in reference to the famous Little Richard’s song, as the correct Italian form would actually be tutti i frutti. Its true meaning, as many of the non-Italian readers might know, is in fact “a confection or ice cream containing chopped usually candied fruits” – something that resembles the Sicilian cassata but that we definitely don’t have here in Italy. This is interesting since this particular variety of ice cream is known by an Italian name all over the world, from the US to India. The invention of tutti frutti ice cream is attributed to Kentucky ice cream factory owner Roy Motherhead, who named it after his daughter ‘Toodie’ in the late 1940s-early 1950s, although there are documents that suggest that the tutti frutti ice cream was already being served in the late 19th century in the US as well as in England.

Coined in 1971 by Boston Globe editor Bill Cardoso, this term is used to define a certain style of journalism and, more in general, writing, marked by the use of “an unconventional, exaggerated and highly subjective style, often when the reporter takes part in the events of the story”. Authors/journalists such as Hunter Thompson, Tom Wolfe, and Lester Bangs are considered godfathers of the movement. The term comes from Italian gonzo (“dolt”), while Cardoso was proposing the spurious French gonzeaux.

Unfortunately, not all paparazzi look as charming as charming Marcello Mastroianni in La dolce vita.

This one word has a very interesting story: it was originally a shortened form of jean fustian (from Middle English Gene, “Genoa; Genovese” + fustian, “strong cotton fabric”), as this particular kind of texture was produced in the Italian city of Genova. The -s was added to jean under influence of the cognate Old French Jannes (modern French Gênes). Originated from an Italian toponym, this term returned to the Italian vocabulary after many modifications and is now used all over the world.

Did we manage to get you into Italian words and language? Follow our blog or study Italian with us to discover the Great Beauty. Ciao! 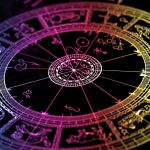 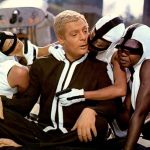 From Italy to outer space: a list of 10 (+1) sci-fi themed Italian songsBlog
× WhatsApp us!