Christmas in Italy is a time for celebration and family, either on the night of the 24th (the traditional cenone, a meal based on seafood, carbs, and sweets) or on the 25th, at lunch (pranzo di Natale, dominated by meats and broth). For this reason, delicious, traditional food is integral to Italian festivities. Italian Christmas cuisine varies by region, reflecting the diverse culinary traditions and ingredients found across the country. Here, we will explore some of the most popular and delicious Christmas dishes found in different regions of Italy, organized by type of meal.

In Lombardia and generally in the country’s northern region, one of the most famous Italian Christmas dishes, consumed at lunch on the 25th, is risotto alla milanese. This creamy rice dish is flavored with saffron and traditionally served with ossobuco, a braised veal shank that is slow-cooked until it is meltingly tender. However, it can also be served with other meats, such as sausage or beef. To make risotto alla milanese, the rice is first sautéed in butter and onions until it is translucent, then white wine is added and allowed to reduce. Next, hot broth is added gradually, stirring constantly, until the rice is cooked to a creamy consistency. Finally, the saffron is stirred in, giving the risotto its characteristic golden color. Together with the risotto, brodo di cappone (capon broth) and cappone ripieno (stuffed capon) complete the traditional Christmas lunch in Lombardia.

Another popular dish in the northeast, specifically in Veneto, is bigoli in salsa. This is, just like the risotto, a primo, which is the course that, in the Italian meal structure, is dominated by carbs: if you are confused, click here to find out more about the Italian menu! Back to our bigoli in salsa, it is a type of thick spaghetti, similar to bucatini, that is made from whole wheat flour and eggs. It is served with a sauce made from braised duck, onions, and vinegar, which is rich and flavorful. To make bigoli in salsa, the duck is first cooked until it is tender, then it is shredded and added to a pan with onions and vinegar. The sauce is simmered until it is thick and rich, then it is served over the bigoli.

In the central region of Italy, one popular Italian Christmas course is carciofi alla giudia, which is a type of fried artichoke that is crispy on the outside and tender on the inside. This dish originated in Rome, and is typically served as an appetizer or side dish. To make carciofi alla giudia, the artichokes are first cleaned and trimmed, then they are sliced and coated in flour and deep-fried until they are crispy and golden. They are then served hot, drizzled with lemon juice and sprinkled with salt. Although the carciofi alla giudia were not originally related to Christmas (in fact, as the name suggests, they are part of the Roman-Jewish traditional cuisine), they are typically served both during the cenone, and during the Christmas lunch.

Capitone fritto, or fried eel, is a popular Christmas dish in the southern region of Italy, particularly in the city of Naples. It is typically prepared by marinating the eel in herbs and spices, then coating it in flour and deep-frying it until it is crispy and golden. The eel is then served with a side of lemon wedges, which can be squeezed over the eel to add a tangy flavor. In Naples, this dish is typically served as a main course on the evening of the 24th.

In the northern region of Italy, a popular meat course for Christmas lunch is bollito misto, which is a combination of boiled meats that are served with various sauces. This dish originated in the Piemonte region but then became popular in the whole North and in Central Italy as well, and is typically served as a main course. To make bollito misto, a variety of meats, such as beef, veal, pork, and chicken, are first cooked in a large pot of salted water until they are tender. The meats are then sliced and served with a variety of sauces, such as salsa verde, which is made from parsley, capers, and anchovies, or mostarda, which is made from candied fruit and mustard. The bollito misto is typically accompanied by a side of boiled potatoes or other vegetables.

In Southern Italy, a popular main course is cuccìa (with the accent on the “i”!). This is a sweet main course: a type of pudding made from dried fruit, chocolate, and nuts, which is traditionally served in the region of Sicily. To make cuccìa, the dried fruit is soaked in water overnight, then it is mixed with chocolate and nuts and shaped into small balls. The balls are then steamed or boiled until they are soft and tender, and served warm with a sprinkle of sugar on top.

One of the most iconic Christmas dishes is panettone. This traditional Italian sweet bread is filled with candied fruits and raisins, and has a fluffy, airy texture. It originated in Milan, but has become popular throughout the country, and is often served for breakfast or as a dessert. To make panettone, the dough is first made by mixing flour, sugar, eggs, and butter, and allowing it to rise until it is doubled in size. Next, the candied fruits and raisins are added, and the dough is shaped into a large dome shape and allowed to rise again. Finally, the panettone is baked until it is golden and fragrant, and is served sliced and drizzled with honey or cream.

Traditionally considered the main rival of panettone (to the point that, based on your preference, some Italians believe they can tell what kind of personality you have!) pandoro is a traditional Christmas sweet bread that originated in the city of Verona but it is served throughout the whole country. It is a tall, cone-shaped bread that is made from flour, eggs, sugar, and butter, and is typically dusted with powdered sugar before serving. Pandoro is often served with a side of mascarpone cream or other sweet toppings, such as honey or chocolate sauce.

In the southern region of Italy, specifically from Napoli, zeppole are a famous Christmas sweet. These are small balls of fried dough that are typically filled with cream or jelly, and are dusted with powdered sugar. They are similar to doughnuts, but are typically smaller and have a lighter, airier texture. To make zeppole, the dough is first made by mixing flour, sugar, eggs, and butter, and allowing it to rise until it is doubled in size. The dough is then shaped into small balls and deep-fried until they are golden and crispy. Finally, the zeppole are filled with cream or jelly, and dusted with powdered sugar before serving.

Torrone is one of the most famous traditional Italian Christmas sweets that has been enjoyed for centuries during the Christmas season. Its origins can be traced back to ancient Rome, where honey, nuts, and eggs were used to make a sweet treat called “turronem.” This sweet is commonly made from honey, sugar, and egg whites, with nuts such as almonds or hazelnuts added for crunch. The delicate, melt-in-your-mouth texture and the nutty flavor make it a perfect addition to any festive dessert platter. In addition to the traditional version of torrone, there is also a chocolate variation. This version is made by adding chocolate to the honey and nut mixture, resulting in a delicious and rich flavor. The chocolate torrone is equally as popular as the original, and it is often enjoyed as a sweet indulgence during the festive season.

Panforte is a traditional Italian Christmas sweet that originated in the city of Siena, in the Tuscany region of Italy. It is a dense and chewy confection made from a mixture of honey, sugar, nuts, and dried fruit, such as figs and candied citrus peel. The ingredients are combined and baked into a dense cake, which is then dusted with powdered sugar and cut into slices. Panforte is a delicious and unique dessert that is perfect for the holiday season. Its rich flavor and chewy texture make it a favorite among many, especially in Central Italy.

No matter what region of Italy you are in, Christmas is a time for delicious food and family gatherings. From risotto alla milanese and panettone in the north, to seafood dishes and zeppole in the south, the culinary traditions of Italy come alive during the Christmas season. Whether you are in Italy or enjoying Italian-inspired cuisine elsewhere, make sure to try some of these delicious dishes to truly experience the flavor of the season… and be prepared for some salad days in January! 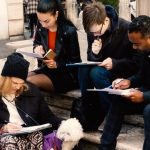 5 things to do in Rome (to improve your Italian)Blog, Featured
Open chat
Need help?
Powered by
Hello,
can we help you?